You are here: Home / Allgemein / Vertical Farming & the City

One of the main drivers for collective sustainable actions is the shared perception of danger.

Think about it for a second… 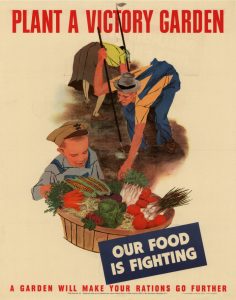 The principles that are now promoted by the concept of Circular Economy have been already adopted in the past during periods of wars and crisis. For instance, during the Second World War, circular design and production principles and recovery activities were massively imposed upon manufacturing companies by local governments [1]. Not only this, governments also promoted the establishment of urban farming activities in order to deal with the high demand for food during war periods. The shared urgency, in that case, was related to the fear of governments remaining without resources during the period of war. Once the war was over, there was no need anymore to worry about resource depletion and therefore we went away from those sustainable restrictions in favor of a type of economy which is based on consumerism. Nowadays, people are once-again worried about the availability of resources in the future, and governments around the World are promoting Circular and Sustainable actions to change the way we produce and use goods.

So, here it is… The linear must become circular!

The Circular Economy is another way to arrange our economic activities. In a Circular Economy, the use of external resources is minimized through the cascading re-use and recycling of products and materials at the end of their life. The value of products and materials is upgraded, whenever possible, with the final aim to prolong the useful lifespan of goods within the society. A circular economy, therefore, aims at minimizing waste along the supply chain, reducing environmental impacts and at the same time prepares the ground for sustainable prosperity. 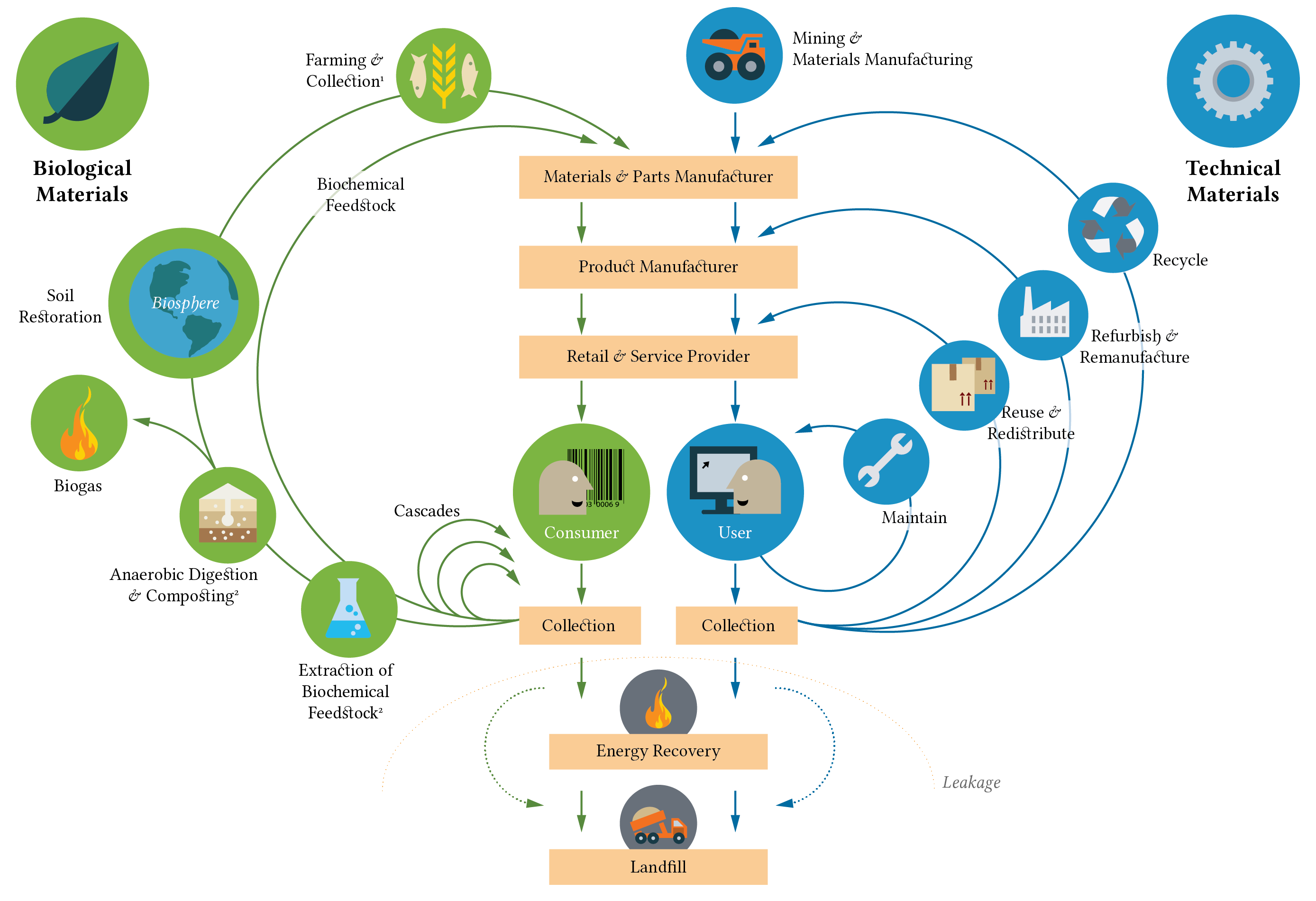 –         Roughly 55% of the current global population lives in cities. This proportion is expected to increase in the near future

–         Most of the economic power is concentrated in cities. In fact, 85% of global GDP is generated in urban environments

–         Cities are the major consumers of energy. Approximately ⅔ of the world’s energy is consumed within cities

–         Cities massively contribute to climate change. Around 70% of global CO2 emissions are attributable to urban centers.

–         Cities work like black-boxes. They depend on massive importation of resources and at the same time they generate a tremendous amount of solid and liquid waste.

“In which ways can Vertical Farming help to catalyze the transition towards circular cities?”

Inspired by the book ‘The Vertical Farm’ by Dr. Dickson Despommier, the Association for Vertical Farming (AVF) has been investigating, during the last few years, the potential contributions that Vertical Farming and Urban agriculture activities could provide to catalyze the implementation of Circular Economy principles in cities. Several workshops and researches were carried out by AVF to assess what the gaps are, to establish circular vertical farming activities from a technical and legal perspective. According to AVF, Vertical farming will become ‘an important pillar in the establishment of sustainable innovative food systems in line with the Circular economy concept’.

Since they are bio-based systems, Vertical Farms already have an intrinsic circular configuration. However, by considering beforehand the potential synergies of Vertical Farms with other economic activities occurring within the city, there is the opportunity to further increase the positive effects of Vertical Farming practices in cities. In fact, Vertical Farms could be symbiotically linked with urban energy and waste flows. Therefore, a clever integration of Vertical Farming with the existing City’s metabolism could help provide solutions for sustainable management of resources in cities and, at the same time, reduce the myriad indirect environmental and social impacts of cities. Ideally, cities can become almost self-sufficient in terms of food meanwhile providing several municipal services which aim at reducing waste and recovering value within the city’s boundaries. 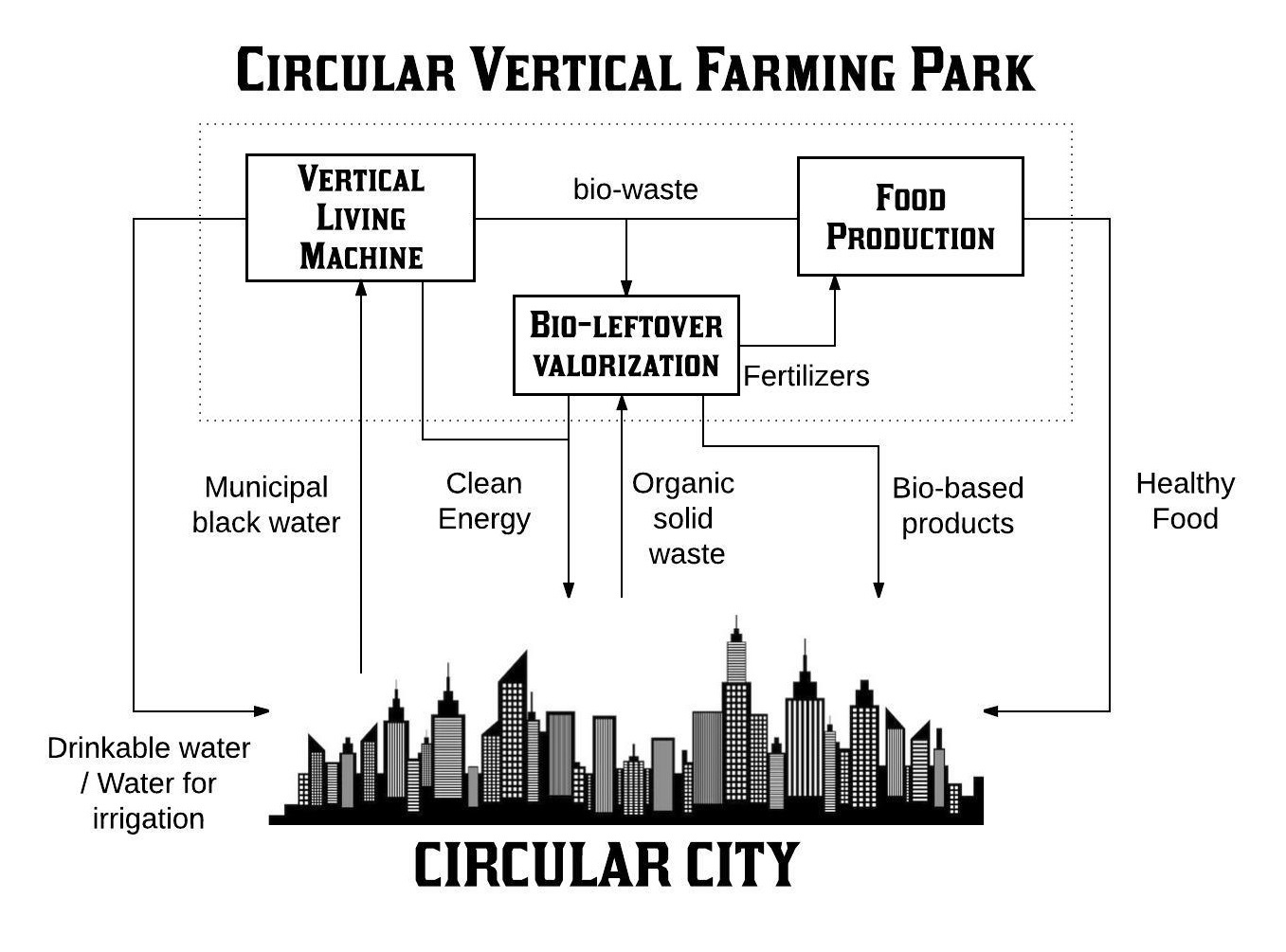 Figure 2: Conceptual visualization of synergies between Vertical Farming and Cities

There are several symbiotic opportunities between existing anthropic activities in cities and Vertical Farming practices. Some examples are:

–         Solid organic waste produced by households, restaurants, hospitals, schools, supermarkets, public events and other commercial activities within the city, can be collected and delivered to the nearest Vertical Farm where they will be converted into energy and other bio-based products such as organic fertilizers, soil conditioners or biochemicals. Excess heat and energy generated by the anaerobic digestion of solid organic waste can be used as district heating or delivered to the local electricity grid.

–         Municipal wastewater generated by households and commercial activities within the cities can be used as input in Vertical Farms. Specific plants can be used to recover drinkable water from grey water by exploiting their transpiration phenomena.

–         Exhaust gases from other near industrial activities can be sent to Vertical Farms, where the CO2 contained in the fumes can be used to boost plant growth

–         Other organic products (such as spent coffee ground, citric peels or oils, and grease) can be separately collected to be further processed into higher-value products such as bio-pellets, textile materials or bio-fuels.

–         An eventual surplus of clean electricity generated by the use of renewable energy systems in Vertical Farms (such as solar panels, micro-wind turbines, and anaerobic digestion) can be made available for the local surrounding community.

Due to its intrinsic circular nature, Vertical Farming has great potential to play a crucial role in the establishment of circular and resilient cities. By moving food production within cities, a large variety of indirect environmental and social impacts of intensive agricultural practices can be reduced: from emissions of pollutants during the agricultural stage, to carbon dioxide emissions during transportation of food goods from rural areas to cities and land use change issues such as deforestation.

Vertical farms integrated into urban environments do not only decrease the pressure of cities on rural areas, but they will provide sustainable local solutions to a large variety of issues such as urban wastewater management and valorization of urban solid organic waste.

And you? What do you think are others possible connections between Vertical Farms and Cities?

Some readings regarding these topics: